My brother and our high school friend Eddie decided to take a baseball vacation. Why not? We flew to New York City to see a Yankees game before they tore down the old stadium. We also tried to take in a Mets game. Then we hopped on the train to go to the hallowed ground of the Boston Red Sox. The trip was just a ton of fun as any sports adventure should be.

My favorite part was tasting hot dogs at all three stadiums. Boston took the prize there for sure placing their dog on a piece of white bread folded over! This almost inspired me to visit the rest of the stadiums to taste their dogs but I thought of my waistline and decided to stick to my current plan instead.

It was great to see a game at Yankees stadium before they tore it down despite the fact it felt like it was 147 degrees outside. At one point, on the verge of heat stroke, I took a moment in the shade. It was there I met an old timer who had been going to the stadium since he was a kid. I asked him about his thoughts on building the new Yankees stadium. He thought the old stadium was just fine thank you very much. The way he looked at it the new stadium would only make it a better experience for those with money who would be in the new luxury boxes. Well, I can’t say that I disagreed with him there! I can only imagine what it was like watching the stadium you had visited for the last fifty years get torn down.

We took in a Mets game but were rained out! Thankfully I still got a hot dog at least!  (I’ll post hot dog photos some day if I can ever find them.  I know I took them!)

And then there was the Sox! Boston just has a great vibe about it. The stadium is old school and the fans are die hard. Hilariously and par for the course our seats were partially obscured by a structural post. But, it didn’t hinder our fun. Neal Diamond singing Sweet Caroline in person, well a recorded version anyway, is to Boston like the National anthem is for every other baseball stadium. I am pretty sure we called our other brother Sean when it played singing it in to his ear! 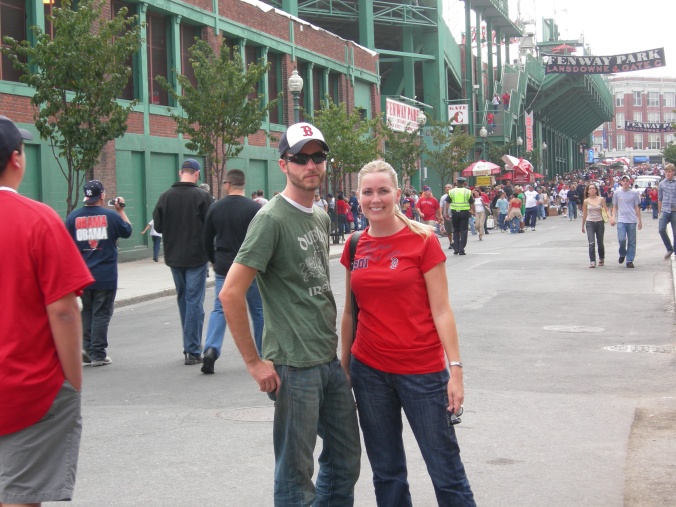 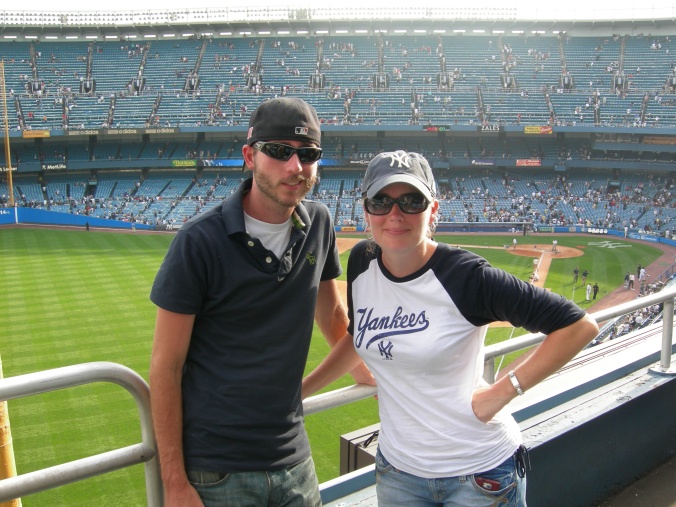 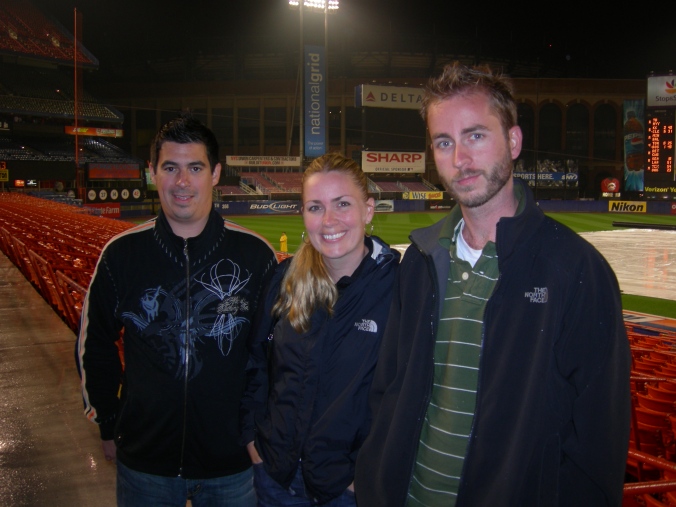 My experience was unforgettable and enlightening. My friend Manuela and I were traveling from her home in Stuttgart, Germany through Switzerland and into Italy. We had spent the day in Monaco visiting their lovely castle, harbor, and casino daydreaming about being rich and famous. We took the train there from Italy and being the end of the day we were heading back. Near the train station we walked by a small television store where a small crowd had gathered. President Bush’s face was plastered on the front of every television in the window. One sees a President’s face on television on a daily basis but there was something strange in his expression and that of the body language of those gathered around the windows. Manuela and I walked over unable to hear what the television was saying. The ticker at the bottom of the news station on one television was thankfully in English. It stated that an airplane had crashed in to one of the twin towers. No one had suspect terrorism quite yet. Manuela and I were discussing the situation in English surrounded by Italian and French speakers as the second airplane crashed in to the tower. Interestingly enough Manuela used to work in New York and was more familiar with the towers than I was. Everyone around us began speaking to us asking if we were “Yanks” asking if we had family working in that building. Everyone outside of the US apparently visualizes our country much smaller than it actually is. I assured them I had no family in the buildings but was quickly becoming overwhelmed with the thought that hundreds of thousands of people must have surely died in these buildings and those surrounding it. The kindness of these strangers was what struck me. People wished me well and prayed that my family would be safe.

In short order the towers fell and the Pennsylvania crash occurred and the word terrorism became a common word. Walking through the lobby of our small hotel the attendant gave me his condolences as though this was a personal loss to me. We only desired information in English which was hard to come by. I started longing for home to be with the people of my country despite the fact this tragedy didn’t personally impact me. I knew my mother would be worried about my safely tucked away in Italy even though she was probably in more danger than me. But, I know how my mom is. I tried to call home and the lines were blocked. If you haven’t experienced it yet the lines are quickly overwhelmed during a disaster and it is virtually impossible to get through to anyone. So, working in law enforcement I decided to call my office knowing the line would be free. I called my co-workers and told them to call my Mom to tell her I was safe. As irrational as it was it was nice to know everyone at work and home was ok too. My Mom was naturally scared to death for my safety and was relieved to get my third person message to her.

In short order more information was provided and moments of silence were experienced over the radios and television and workplaces throughout Europe. Every newspaper had every government official in every country supporting the US which was a very comforting feeling. Somehow, I knew this support would turn political and would change. But, at that moment the normal people through the countryside supported the US in our time of need and that is what I choose to remember.

Time has gone by and my memories are starting to fade but I remember two things vividly. I remember driving past an American Army base near Manuela’s home in Germany seeing it covered in signs, flowers, and teddy bears in support of NY and the US which were one in the same. And I remember a popular song at the time Enya’s “Only Time” had taken on new meaning. It was a beautiful and popular song but it was played in solemn remembrance of those who died that day. Radio stations all over Europe in all the countries we drove through to get home played it over and over.

My story isn’t over. I needed to get home. You may remember that flights were cancelled for days after the attacks. Domestic flights resumed shortly after but international flights left people stranded for a few days. I called the airlines offering my flight to anyone who needed to get home. The reality was I had a safe place to stay with Manuela and my job wouldn’t miss me. The airlines refused to change flights for anyone because too many people were displaced already. I would come home and I would come home on the first day international flights were again allowed. And I needed to be at the airport four hours early. I said my goodbyes to Manuela and she left me in the Stuttgart airport where my flight was promptly cancelled. I was placed on another flight hours later to Frankfurt where I missed my connecting flight because the airports were literally nuts full of stressed out airline employees, and scared and smelly people who were living in the airport and hadn’t showered for days.

It was in the Frankfurt airport where I met the Ugly Americans with whom I will never forget. Naturally everyone was exhausted, displaced, agitated, and scared. Understand people were still afraid their plane might be high jacked in the days following the attacks. Additional security points were added at every step of the process and I was currently standing in a line of at least 500 people. I was between a lovely young Indian couple with an infant in traditional Indian clothing and four older white people from Georgia who had been golfing in Germany. We had been standing in this line for what felt like hours and I couldn’t help but notice the frightful faces of the Indians ahead of me. I had observed their British accent and had even noticed their Great Britain Visas. I wondered what it must be like for them at that moment.  Many people were looking at them suspiciously.  The Sari and traditional clothing the man was wearing clearly identified them as having Indian decent to me. But, behind me one of the Georgian men loudly declared, “I hope that Rag Head isn’t going to blow up OUR flight.” The Indian woman grasped her infant tighter and the man looked stalwartly ahead. I turned around and gave them the famous hairy eyeball not believing my ears. The man’s wife agreed with his statement and continued to make statements frankly I don’t think I can come to type out loud.

Mount Vesuvius erupted. I turned to the Georgian people and pointed my finger at them stating that they were ugly Americans, I was embarrassed to call myself an American if that was what we were thinking after such a recent tragedy, told them they were uneducated and bigots for not recognizing the difference between an Indian couple and those that perpetrated this tragedy, the young woman had a baby for God’s sake, and so on and so forth. Sadly, when I turned around the couple was gone clearly wanting nothing of the confrontation or my outburst. Security wasn’t particularly pleased with my raising my voice or a bunch of Southern responses to my outburst of, “Well I never!” (Say it like Scarlet O’Hara.) I had had about enough of these people and gave up my place in line feeling sad, angry, and confused.

From there I flew to Chicago where I spent the night on the floor of the airport Gate with a lovely elderly woman from Land Park who was afraid to be alone with all of the “business going on” as she put it. After another eight hours we finally found a flight home to Sacramento.

As every flight landed during this ordeal people would clap. It took me nearly 24 hours to get home. The memories of people patting the Yank on the back because of their perceived loss of my family, the moments of silence throughout Europe, the teddy bears in front of the American Army base, Enya’s song, the racist Georgians, the frightened Indian couple I tried to stand up for, images of firemen holding up the American flag on top of “the pile” on the cover of every newspaper, and the sweet lady from Land Park will forever be etched in my mind. It was just random that I was on a trip when all of this happened. But, I found it to be an enlightening place to be for such an event. And as politics and ugliness unfolded over coming years I choose to remember the sentiments of the normal Europeans I came in to contact with because those are what matter to me.

Happy Patriot’s Day. (It seems a strange sentiment to wish but wish it I will.) I hope you can remember where you were on September 11th, 2001 and never forget those that sacrificed their lives and all of those across the world who supported them and still do. 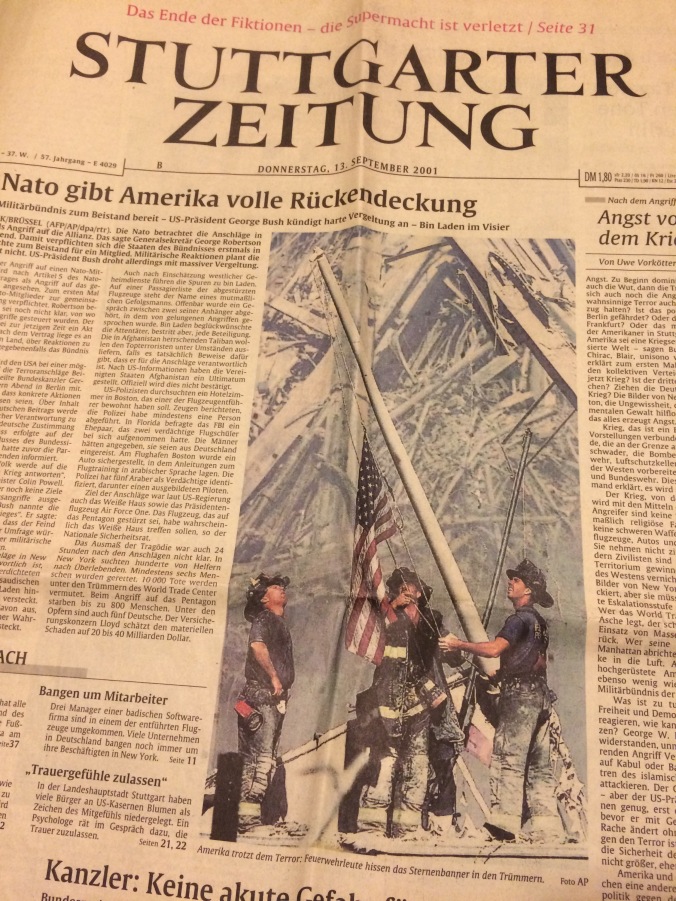