While planning our Ireland trip with my parents I knew I wanted to take them to Northern Ireland.  I hadn’t been to the North since I visited with my brother approximately fourteen years ago.  I had a few must see items on the list but The Titanic Museum kept creeping up in my travel books and online.  It’s a reasonably new museum one, to be honest, I didn’t have much interest in seeing.  I figured I had seen all I needed to see of it from watching the Leonardo DiCaprio movie and a few documentaries on TV over the years.

Andrew Petcher from Have Bag, Will Travel recommended it SO highly that I gave it another thought.  I knew we would be passing through Belfast on our way to the far North and figured it might be a nice place to stop one my parents might also enjoy.  Thanks Andrew for the recommendation because all three of us really enjoyed it! 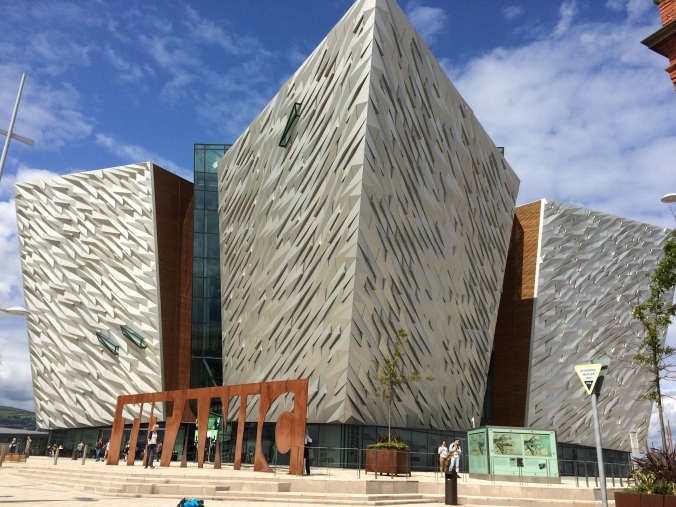 The museum is located on the grounds of the actual shipbuilding yard the Titanic was created on.  The museum building is an architectural masterpiece mimicking the lines of the ill-fated ship.  It is surrounded by a pool that mirrors the beautiful lines and bright silver exterior.  The front of the building has a very cool and very large Titanic sign framing a stunning feminine sculpture. 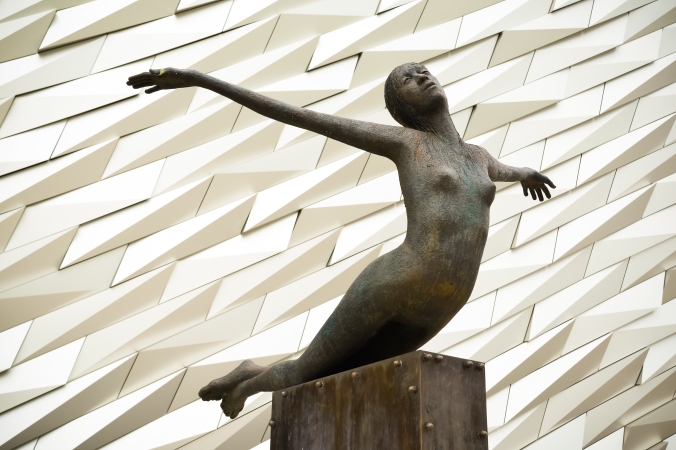 Once one is done admiring the outside of the building and enters the museum they are treated first to a history of Belfast and what made her a great city during the time of the Titanic.  Shipbuilders decided to build the infrastructure to build large ships before even having any contracts.  Kudos to them for having the guts!  Later in the museum visitors can better understand exactly how the ships were actually built.  They can even take a short amusement park style ride that explains each step.  (Sounds cheesy and maybe it is but it was fun!) 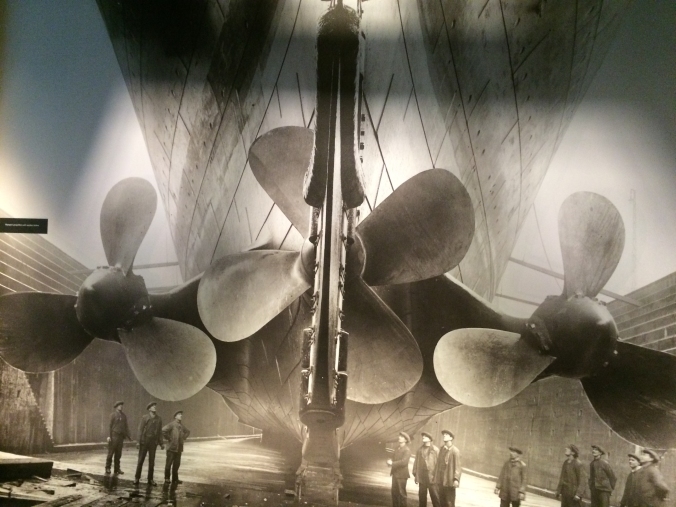 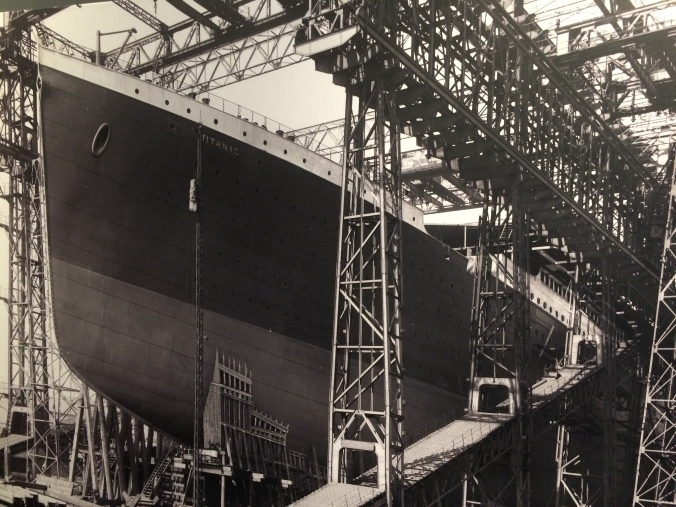 The museum describes throughout each exhibit people associated with the Titanic from those who built the ship, to those who worked on the ship, those that purchased tickets, and those who helped rescue passengers.  This small and unassuming sequence of displays really makes the visitor connect with the human aspect of the tragedy in a way that is easy to ignore when we see or hear about the ship now. 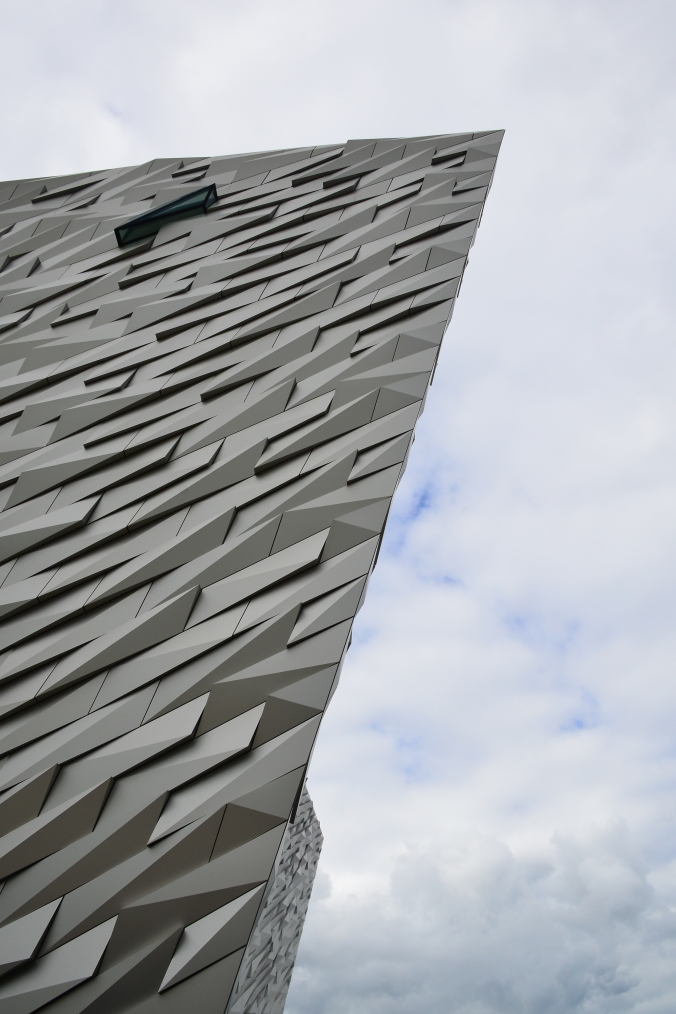 Next, visitors can see the interiors of all of the rooms of the Titanic with recreations of the actual furniture, ceramics, silverware, textiles, clothing, etc.  It was enjoyable to see the difference in the large staterooms versus the smaller rooms shared by lowers class passengers and employees. 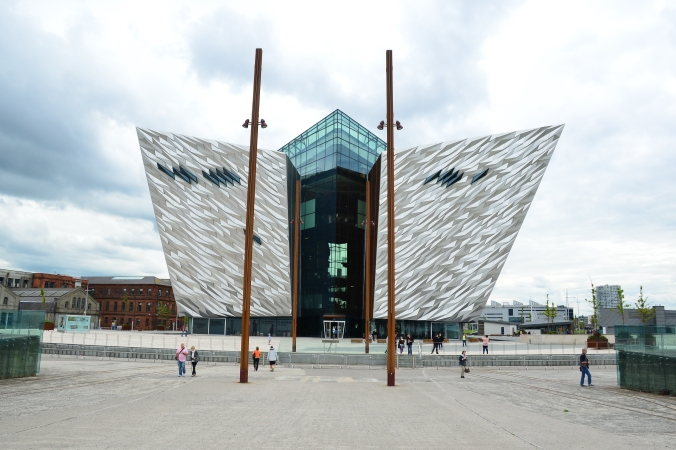 Later the museum moves in to the accident and its response.  It highlights the heroes and rescuers who saved many lives and those who were cowards and saved themselves while they let women and children die.

“…as the smart ship grew in stature, grace, and hue

In shadowy silent distance grew the Iceberg too.” – Thomas Hardy

The museum had another section on the discovery of the Titanic ship wreck and the technology required to find it.  It even simulates, via video in the floor, the actual shipwreck as it looks today if you were floating over it in a glass bottomed submarine. 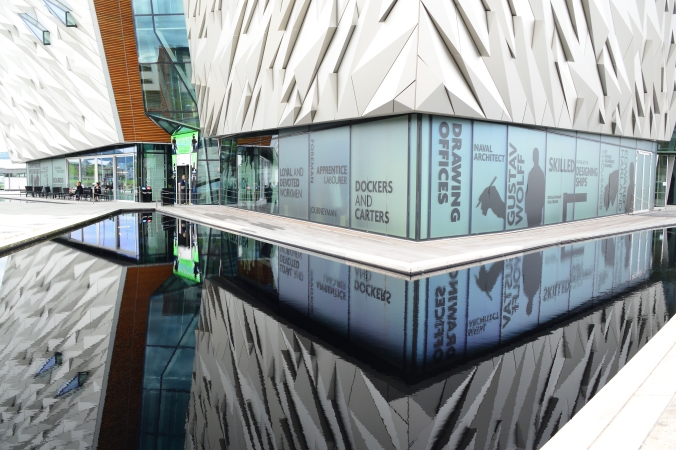 Finally, the museum focuses on the pop culture of the Titanic and its music, literature, theater, and movie history.  You can be certain Celine Dion is belting out her tune probably much to the dismay of the staff who works there and listens to it over and over to the point of insanity.

This top rate museum does a fantastic job of exploring every single aspect of the Titanic from before it was built all the way to today.  They do it in an interactive and interesting way where the visitor’s interest never wanes for a moment.  I couldn’t recommend this museum more.  As my mother put it, “This is the best museum I have ever been to!”  Take it from my Mom because that is big talk.